You are here: Home / Business / Supreme Court upholds use of eminent domain for Dakota Access pipeline 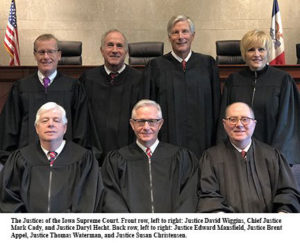 The Iowa Supreme Court has upheld a district court ruling that state regulators properly granted use of eminent domain for the Dakota Access pipeline.

Several landowners and an environmental group sued saying the Bakken oil pipeline did not serve the “public convenience and necessity and eminent domain should not have been used to take land for the pipeline’s route through Iowa into Illinois.

The Iowa Supreme Court ruling says the legislature clearly gives the Iowa Utilities Board authority to interpret the meaning of “public convenience and necessity”.  It says the IUB did weigh the benefits and costs in making that determination for Bakken pipeline.

The court also concluded that the use of eminent domain for an oil pipeline does not violate the Iowa Constitution or the United States Constitution simply because the pipeline passes through the state without taking on or letting off oil.

Justice David Wiggins did not agree with the majority, saying the Iowa public cannot use and does not derive a direct benefit from the pipeline and the company should not have been allowed to use eminent domain. Justice Brent Appel joined his dissenting opinion.

The attorney for the property owners, Bill Hanigan, released this statement:

“We are disappointed for our clients, but also for all Iowa landowners. This sets a precedent for wealthy developers seizing Iowa farmland for private ventures that bring no measurable benefit to Iowans. Appellant Northwest Iowa Landowners Association and its related organization Private Property Rights Coalition are particularly concerned with how today’s majority decision opens the door for more developer driven condemnations.”