You are here: Home / News / Expert discusses good and bad of seatbelts on school buses 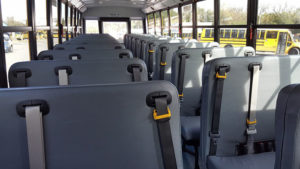 A bus fitted with seatbelts.

The state is proposing a change in rules to require that all new school buses must have seatbelts.

The Des Moines School System has been purchasing new buses with the lap/shoulder belts for a couple of years now. The district’s transportation safety specialist, Robin Witt, says reaction is mixed when the issue is brought up to bus drivers. “They’re good and bad, I will tell you that. And it’s basically all what your beliefs have been,” Witt says. “I’ve been in busing since 2005 — and of course I originally thought when I heard seatbelts was ‘oh my goodness, how are we going to get them out in case of a fire’?”

She learned that fear was not an issue. “Kids can still get out of the seatbelts, and we do have seatbelt cutters just in case there is a problem with one or two. And I believe with the safety issue of kids sitting down, seatbelts are great, because they are belted into their seats,” Witt says. She says the designed of the seats on buses makes it important that the kids are sitting to avoid injuries.

“Because they’re not sitting they can end up wrenching their back on the seat if they are standing or walking around. With the seatbelts, yeah, they do stay in the seat. It is so much better that way,” Witt says. Witt drives a bus and says there are different adjustment periods for kids to adapt to the belts based on their age and experience.

“The little kids that have never been on a bus before, yes, it’s like second nature. However, even our elementary kids who have been riding buses for a couple of years and all of a sudden you bring a seatbelt bus to them, they are like ‘no, no.’ They don’t just get in the seat and buckle up, you have to tell them,” according to Witt.

Witt says the bus she drives does not have seatbelts on it and her kids complained when she was gone and the fill-in driver used a bus with seatbelts on it. Buses can have 60 or more kids on them, and Witt says drivers are concerned about getting all the kids to wear seatbelts and whether the driver will get in trouble if the kids don’t . But she believes the kids can adapt.

“If you had to go seat to seat to make sure somebody is belted — we would never be able to get them home on time or get them to school on time,” Witt says. “It’s going to be a learning curve. And the kids are going to have to learn when they get in to put their seatbelts on, and then we can go.” Witt says the drivers do like the idea of having fewer discipline problems during bus trips because the students are buckled in.

The State Board of Education has given preliminary approval to a plan that would require schools to belts in the new buses they order. They will hold a hearing on the issue later this month.