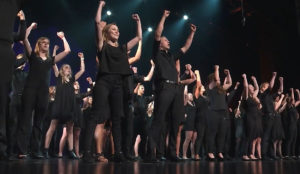 The talents of Iowa’s young actors, singers and dancers will be celebrated and featured on stage at the Des Moines Civic Center tonight.

Karoline Myers, the facility’s education manager, says the Iowa High School Musical Theater Awards Showcase is the culmination of a year-long effort. “Throughout the school year, we’ve been sending theater professionals who serve as adjudicators out to each one of our participating schools, we have 77 schools from across the state participating this year,” Myers says. “So they’ve been going out and seeing the full school musicals and giving them all sorts of feedback and scores on things they’re doing well, and giving them feedback on ways that they can grow.”

The best of the state’s best will be singled out during tonight’s event. Myers says, “We’ve taken all of that feedback from adjudicators and we’ll be giving awards and honors to schools for where they really excelled with their musical productions as well as featuring student performances, which are really highlights from that musical theatre performance across the state.”

Some 600 students will be performing highlights from the season’s productions at their respective high schools. Two students, a boy and a girl, will be singled out for the “Triple Threat Award” as the top achievers in lead roles. They’ll represent Iowa at the National High School Musical Theatre Awards in New York City later this month. “Those two students will win a trip out to New York, all expenses paid,” Myers says. “They’ll spend a week out there working with students from all over the country and with Broadway professionals and they’ll actually get to perform on a Broadway stage at the end of that week.”

A $10,000 scholarship will also be awarded tonight for a graduating senior who wants to work in technical theater, behind the scenes. The host tonight will be Broadway actor Kyle Taylor Parker, best known for playing Lola in the national tour of “Kinky Boots.” The ceremony will be streamed live at 7 p.m. at iptv.org.