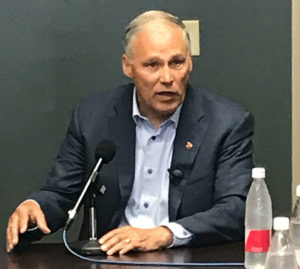 “I ran for the legislature in 1988 and it was about a 63-64 percent Republican district. It was a small, agricultural town in eastern Washington,” Inslee said. “…I spoke to the people about this issue being a freedom issue and I was elected by the people in a huge upset and I’ve always hewed to this issue ever since.”

“Some of us think is you believe in driver’s ed you ought to believe in sex ed, too,” Inslee said. “They are equally worrisome.”

“If a woman is not treated as a full citizen and has full autonomy over her own body…she can’t make the best decisions about her own education and her own career,” Brener Schmitz said, “which really means we’re not getting the strongest middle class that America can have.”

Inslee is campaigning elsewhere today, visiting a community college program training students to maintain wind turbines. He’ll return to Iowa this weekend, as Inslee will be one of the 17 candidates scheduled to speak at an Iowa Democratic Party fundraiser in Cedar Rapids on Sunday, June 9.