You are here: Home / News / May was 4th wettest on record 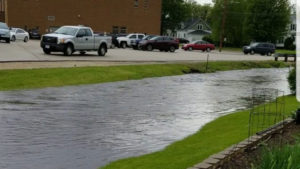 Above average rainfall led to flooding in many areas of the state.

May rainfall ended up just a little short of being double the normal average for the month.

State Climatologist Justin Glissen says we got trapped in a pattern that wouldn’t go away. “What we were seeing is the jet stream was effectively locking in over the state, so every two or three days we would get measurable rainfall over parts of the state,” according to Glissen. “Statewide where we turned out was 8.2 inches…and that will make it the fourth wettest May on record.” He says average rainfall for May is 4.5 inches.

The month ended up just a little cooler on average. “We were below average –not too bad, about three degrees under what we would expect. Normal temperature is about 60 degrees. We came in about 57,” Glissen says. He says with all the cloudy days, the three-degree difference from the average was a little surprising. “Not as cool as it would have seemed with all the rainfall that we had across the state,” he says.

Glisan says the climatological out early on for June showed an equal chance for both higher or lower than normal rainfall and temperatures. He says the mid-May outlook showed a little warmer and less rainfall in the outlook. “So, it looks like we might be shifting towards what we would expect climatologially across the state. June tends to be the wettest month of the year and we start to have longer days and warmers temperatures. We shall see as we move forward,” Glissen says.

The wetter than average June comes after March and April were both slightly below average in percipitation.