You are here: Home / Crime / Courts / Traffic cameras turned back on in Cedar Rapids 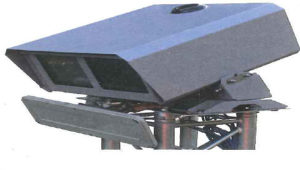 The city of Cedar Rapids turned its traffic cameras back along with a switch in the calendar to June.
City public safety spokesman, Greg Beulow says drivers will get a grace period to adjust. “During the month of June the police department will only issue warnings to individuals, ” Beulow says. “We want to make it very clear that the traffic cameras are back on. They’re activate at locations on Interstate 380 at the dangerous S-curve. And they are also located at five other dangerous locations throughout the city of Cedar Rapids.”

Beulow ways there are signs up that indicate the speed cameras are coming up and their locations are all listed on the city website.

There’s nothing to hide, we want people to be aware that they are activated and that warnings are going to be issued. The main goal is to reduce speed so that people obey the speed limit,” Beulow says.
He says the safety of the roadways improved with the cameras. “The number of crashes and the number of serious crashes that involve injuries has decreased.  The other big one is the number of fatalities,” according to Beulow.”We’ve only had one fatal crash while the cameras have been operating — as opposed to seven before the cameras were operating.”  Beulow says there were a lot of comments when the information about the cameras being turned back on went up on social media.
“We hear it really from both sides. Some really support it — they think that when the cameras are on the motoring public is safer. The statistics that we have support that. There are some that don’t agree with the cameras at all,” he says.  He says some people believe they should be able to talk to the officer in person when they get a ticket.
Others says it is a big money grab as the cameras bring in millions of dollars for the city. Beulow says they have addressed the money concern.
He says any money generated from the cameras will go toward hiring ten police officers and an administrative person to manage the automated traffic system and the municipal infraction process. The cameras were turned off during a court challenge against them.  The city won that court battle and decided to turn the cameras back on.
(Photo from City of Cedar Rapids)