You are here: Home / Fires/Accidents/Disasters / Burlington businesses waiting for water to go down 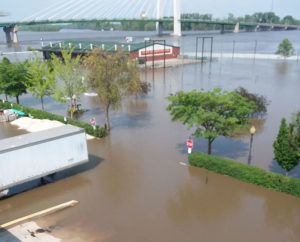 Riverfront businesses in downtown Burlington are drying out after a temporary flood wall broke this weekend.

The Mississippi River now surrounds the city’s auditorium, and some businesses have closed for a few days. Mac Coffin is the president of the contracting company Frank Millard & Co. He says he’s been pumping his basement since Saturday to keep the water levels at about four feet.

“We’ve had our share of these so we kind of know what to do. I mean we’ve been through it so many times. But our building is high enough we don’t get hurt super bad, just inconvenienced.” Coffin says. He says if the water got any higher it would be more of a concern for him.

“If it was up another…say another foot and a half from where it was, then we’d be having a whole different conversation. But we don’t really…as far as this building goes…have to be super concerned until it gets up to over 25 feet. Then…then we got to start worrying,” according to Coffin.

Coffin says the company has been in downtown Burlington for 150 years and he has no plans of leaving.  The damage seems less extensive than when another HESCO barrier broke in downtown Davenport a few weeks ago and swamped that city’s downtown area.

Burlington is in the process of building a permanent flood wall. Residents say they’re hopeful they won’t have to rely on the more vulnerable HESCO barriers once it’s done.