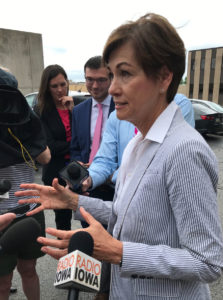 Governor Kim Reynolds will meet with President Trump next week when he visits Iowa and she plans to warm him that imposing new tariffs on Mexico could derail the U.S. Mexico Canada Agreement.

“The timeline is sensitive. Those are our number one and two trading partners,” Reynolds said this morning. “Yes, I agree that we need to secure the border. We need to fix a broken immigration system. We need parties on both sides of the aisle to sit down at the table and address this and quit putting politics forward. Tariffs right now, I think, potentially disrupt us getting the USMCA ratified.”

The trade deal will provide some stability to Iowa manufacturers and farmers, according to Reynolds.

“It will allow our allies to link arms and really focus on China, who continues to be a bad actor,” Reynolds said. “…It’s just not the United States that’s dealing with them and I think that’s an opportunity to do that.”

Reynolds indicated the first topic she plans to discuss with the president next Tuesday is the federal response to flooding.

“The more that we can streamline the bureaucracy at the federal level to help get the need and assistance to Iowans who have been impacted by the flood, it’s critical, so I want to continue to encourage him to do that,” Reynolds said. “Let him know that this is early on. We have an entire state that’s being impacted by flood and we are going to have additional requests moving forward and I want to thank him for his timely response in that.”

Reynolds was at Hamburg’s City Hall and the Community Center in Pacific Junction yesterday to get an update from local residents dealing with flooded properties.

“We can’t really even begin to get the final assessment of the damage until we’re able to plug the major breaches,” Reynolds said.

Trump will headline an Iowa GOP fundraiser in West Des Moines next Tuesday, but earlier that day he’ll be in Council Bluffs to discuss his administration’s recent rule allowing year-round sales of gas with a higher blend of ethanol. Reynolds told reporters today that she plans to thank Trump for that move on E15 when she meets with him next week.