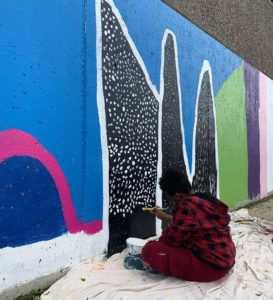 A student works on the mural.

About 200 student-artists from Waterloo and Cedar Falls designed and painted a 3,000 square-foot mural along the Cedar River.

Youth Art Team Director Heidi Fuchtman says the mural commemorates Waterloo’s civil rights history and it’s goal is to inspire discussion. Before anyone lifted a paint brush, Fuchtman says the students conducted hundreds of interviews. “The relationships that I think were built and the conversations with people of all ages and with each other, we’re looking back at a time in our history,” Fuchtman says, “but it applies to the young artists now and it gives them a space to be a part of the story moving forward.”

The artists range in age from six years to 70 years. Ninth-grader Ahmad Madlock is one of the artists who conducted the interviews.
“The inspiration was definitely there, but then also the sense of pride that we were tasked with telling the story of our community,” Madlock says. “I feel it’s very important and I feel like it’s a really big thing to try to do, but the fact that we were given this feat is very honorable.”

A celebration to mark the mural’s completion is planned this (Tuesday) afternoon, featuring awards, live music and more painting. The mural is located near downtown Waterloo at the Riverloop Amphitheater and it’s expected to be part of a Civil Rights Walking Tour that’s being developed.