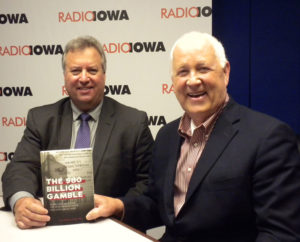 A new book details the twists and turns in the case of the Iowa Hot Lotto ticket that led to the discovery of lottery fraud in several states.

The story started when Eddie Tipton, the former security director for the Multi-State Lottery Association, sent someone to claim a $16 million Hot Lotto prize hours before the ticket expired in 2011.

Former Des Moines Register reporter Perry Beeman co-wrote the book with retired Iowa Lottery executive director Terry Rich. “What this really does is take the reader inside to the actual conversations — like say between the lawyers and the Iowa Lottery staff on the phone — and some of those details you wouldn’t otherwise have,” Beeman explains. It turned out that Eddie Tipton had put a piece of code into the system that selected the Hot Lotto numbers so he could play the winning numbers before the drawings in any of the states that participated in the game.

Beeman says they don’t get deep into the computer programming aspect of the story — but do tell how the whole plan unraveled. “It’s a story about how the Iowa Lottery staff and other Iowa officials cracked a case that some of the other states didn’t,” he says. “I mean they let Eddie and his accomplices go ahead an cash in those tickets. Iowa did not pay the ticket. So, it’s a story of greed, of true detective work, and frankly, it’s also humorous in places.”

Rich says one of the humerus side notes is how Eddie’s brother Tommy — who took people on hunts for bigfoot — would help cash the tickets.
“He would recruit his people to cash his tickets on his bigfoot hunts. He fell out of a tree while he was bigfoot hunting and he was in the hospital, and the FBI was investigating how he got all this money in his bank accounts,” Rich says. “They thought it was money laundering — he said ‘no, no I won the Colorado lottery.” Rich says that revelation broke the case wide open because it created a link between the two brothers and lottery jackpots.

The investigation went on to find others who had won jackpots in Wisconsin, Kansas and Oklahoma from tickets rigged by Eddie Tipton. The had gotten away with the scheme, and Beeman says they may never have been caught if they hadn’t been unable to pass up trying to cash in the Iowa ticket.

“Part of the book we examine greed and how research has shown that people tend to start small and then build — and if they are successful — they keep going with their greed and amp it up. And that’s what happened with Eddie Tipton,” Beeman says. Some of the clues that led to Tipton turned out to be good luck for the Iowa Lottery. For example, Rich says they had watched and listened to surveillance video and audio of the ticket being purchased, and the voice of the person who called in to collect for Tipton didn’t sound the same.

“Only four convenience stores out of the 2,400 that the Iowa Lottery used to sell tickets had audio. It wasn’t the video that caught him, because he was disguised with this hoodie — it was the audio,” according to Rich. ” So, I think that there are a lot of…real fun deals that I think people will enjoy reading. If he hadn’t bought it at that location, if he had sent someone in in a hoodie, we probably would have paid.”

Tipton agreed to tell prosecutors his secrets to manipulating the tickets in a plea deal after he was arrested. Beeman says it’s one of the most unusual stories he had ever covered. “It has a lot of twists and turns and the idea that this regular guy, this hoodie-wearing regular guy — IT guy making six figures, doesn’t really need money — decides to embark on this kind of scam is really pretty compelling and odd really. It’s a good story,” Beeman says.

The book is called “The 80 Billion Dollar Gamble,” because that’s the amount of money spent on the lottery tickets each year. It is published by Business Publications Corporation and is available on Amazon, Kindle, Audible Audiobooks, Barnes and Noble and other selected bookstores.