You are here: Home / Fires/Accidents/Disasters / Fundraiser under way for family of man who died saving daughter from dog 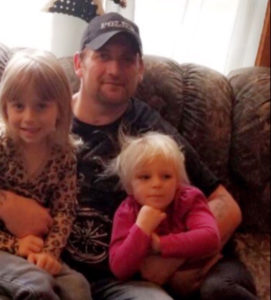 Photo from GOFUNDME page of Joey Quick and his daughters.

A GoFundMe account is raising money for the family of an Illinois man who died after saving his daughter from a dog that attacked three people in Fort Madison.

Fort Madison police responded to a call about the dog last Friday and shot the dog to death as it was attacking a man in the front yard of a home. They found 33-year-old Joseph Quick lying in the doorway of a home and he asked them to attend to his five-year-old daughter, who had been bitten in the face.

Police credit Quick with saving his daughter’s life. He suffered a heart attack and efforts to revive him at the scene were unsuccessful according to the GoFundMe post.

Quick leaves behind a wife and four children. His funeral will be held Friday morning in Dallas City, Illinois, which is about eight miles from Fort Madison.

By mid-day today, 416 people had donated nearly $16,000 to the GoFundMe account. The woman who set up the account posted the following message this morning: “On behalf of Joey’s family we would like to thank each and every one of you for your support, prayers, and kind words. All donations are going towards his funeral and also anything left will be entered into a trust fund to help support his four children go to college. Thank you all so very, very much. From the depths of our hearts we thank you.”