You are here: Home / News / Hotel Maytag in Newton set for grand opening after major renovation 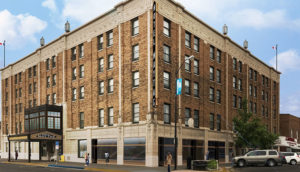 A grand opening is set for this afternoon to show off the historic Hotel Maytag in Newton.

Various city officials and the public have been invited to a program and tour of the renovations that have taken place at the 93 year old building. It was originally built in 1926 by Maytag Corporation owner F.L. Maytag. The 5-story structure began falling into disrepair in the 1960’s and was largely neglected until two years ago when Hatch Development Group of Des Moines took an interest in restoring it.

Developer Jack Hatch says the 16-million dollar renovation hasn’t been easy.  “You open up a wall, a ceiling and there were supposed to put new duct work in or electrical work, and we find enormous mechanical instruments,” Hatch explains, “remembering that this was the first building west of the Mississippi that had air conditioning,” Hatch says.

At the beginning of this year the original demolition budget of $700,000 had already climbed to more than one million dollars. “There were all sorts of things that we found that were hard to work around,” Hatch says. There are 45 apartments being restored in the building.

Hotel Maytag Manager Alida Anderson says about half of them are ready for occupation and some residents have already moved in. The movie theater in the building reopened in November and Midtown Café re-opened in April after months of renovation. The Grand Opening is being held from 4 to 5:30 p.m. today.