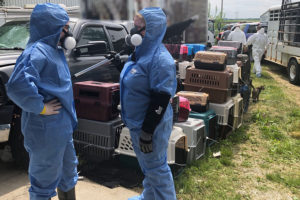 ARL workers had to wear respirators to collect the cats.

The CEO of the Animal Rescue League of Iowa says it’s by far the worst animal hoarding case in more than a decade, with animals found in “absolutely horrendous” conditions.

Tom Colvin says teams wearing hazmat suits entered a house on Tuesday in Polk County, north of Des Moines in rural Madrid, to remove about 100 live cats and another 200 that were dead. “The air quality inside of that house was such that we could only put our workers in, our rescuers in for 30 minutes at a time,” Colvin says. “Even with respirators, masks, that type of thing, it was just an overpowering stench that was inside the building.”

The air was so toxic, he says, dozens of cats were pressed against open window screens, trying to get fresh air. Cat urine soaked the curtains that hung near the floor and an ARL news release says “multiple feet of feces and garbage covered every square inch of the home, including kitchen counters.”

“Mounds and mounds of fecal material throughout the entire area,” Colvin says. “Nearly 200 cats were removed from refrigerators and freezers and yes, we had to sort through human food in order to get to the dead cats.” 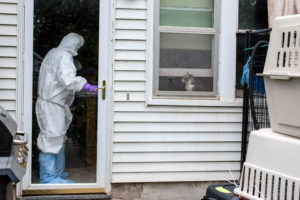 Cats that were dead and alive were found all around the house.

This is the third cat hoarding case the ARL has responded to in central Iowa in the past 6 weeks, compared to one case in all of last year. The Des Moines facility is overwhelmed by the scope of this rescue and Colvin says they were already caring for about 1,100 cats prior to this discovery. He says there are several ways folks can lend a hand.

“We’ve got probably 200 cats available for adoption,” Colvin says. “If people are thinking about getting a cat right now, adopting one of our adoptable cats currently is going to make more room and more resources available for this rescue.”

Cash donations are also very welcome. “There are a number of things that are not going to be covered with the rescue process, financially,” Colvin says. “There are going to be medications ongoing, treatments 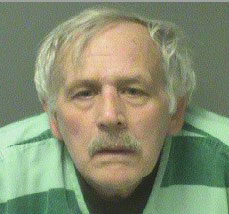 ongoing that are going to go for quite a period of time. Donations such as kitten food, we’ve got a lotta’ kittens.”

Many of the rescued kittens are just days old, the tiniest weighing only four ounces. Colvin says at least one person was living in the house, but he refused to identify the occupant. The Polk County Sheriff’s Office arrested 65-year-old Dennis Carlson of rural Madrid on Tuesday afternoon. He’s charged with multiple counts of animal neglect and failure to dispose of a dead animal.

New website just for donations in this case: http://ow.ly/Ks0W50urAZs