You are here: Home / Sports / Iowa’s Cole McDonald is drafted by the Houston Astros 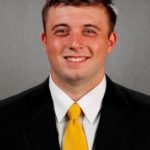 Iowa senior Cole McDonald was selected by the Houston Astros on Wednesday in the 15th Round of the 2019 Major League Baseball First-Year Player Draft.

The right-handed pitcher from New Hampton, Iowa, was taken with the 466th pick. McDonald is the 21st player selected under Iowa head coach Rick Heller and it is the 13th consecutive year the Hawkeyes have had a player taken in the MLB Draft.

McDonald went 6-3 with a 3.54 ERA in 15 starts as Iowa’s Friday night starter in 2019. He finished the season with 83 strikeouts over 89 innings, ranking in the top 15 in the Big Ten Conference in both categories.

In the final start of his career, McDonald was at his best. He allowed one run on five hits and fanned nine over eight innings to lead the Hawkeyes to a 4-2 Big Ten Tournament victory over top-seeded and 21st-ranked Indiana.