You are here: Home / News / Ernst talked to Trump about threat of new tariffs on Mexico 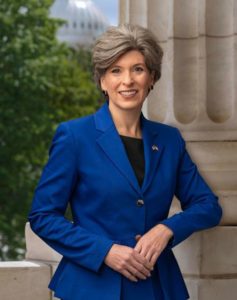 Iowa Republican Joni Ernst says Republican senators are “overwhelmingly” opposed to additional tariffs on imports from Mexico. President Trump has threatened to impose a five percent tariff on Mexican imports on Monday to pressure Mexico to stem the tide of migrants arriving at the southern border.

“The administration and especially President Trump — I did speak to him personally this last Friday — knows exactly where I stand,” Ernst said today. “They know where a number of other colleagues stand on this issue.”

In an interview in Iowa last Friday, Ernst said “tariffs cannot be the answer to everything” and Ernst has been warning ratification of the U.S. Mexico Canada Agreement may be endangered if Trump imposes new tariffs on Mexico Monday. Ernst today said she does not want to speculate about whether the Republican-led U.S. Senate may try to override the tariffs if Trump follows through.

“We’re getting a lot of conflicting information from the administration right now. In moment we hear that things are going well and, ‘Perhaps we don’t need the tariffs.’ And then a moment later we’re hearing, ‘Okay, maybe we’re going to go ahead with the tariffs,'” Ernst said. “I hope we don’t get to that point, but I do think congress needs to exercise its right to put some checks and balances out there.”

Any “resolution of disapproval” of the tariffs would originate in the House, according to Ernst. She suggested there are ways for the U.S. and Mexico to resolve the situation without new tariffs.

“They have a border into Central America that is a choke-point. It is, I believe, only around 150 miles of border. We have 2000 miles on our southern border with Mexico,” Ernst said. “So, is there a way that we can collaborate and boost up the patrols in that area to make sure those folks from Central America aren’t crossing into Mexico?”

Ernst made her comments this (Thursday) morning during a conference call with reporters.