You are here: Home / Military / Iowa historian reflects on 75th anniversary of D-Day 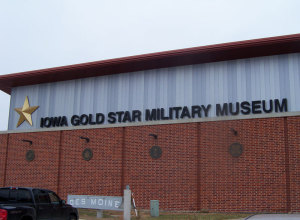 Today is the 75th anniversary of the invasion of Europe by the United States and its allies in what General Dwight Eisenhower called the “Great Crusade” to end World War Two.

Iowa Gold Star Military Museum historian Michael Musel says “D-Day” was a big test of the American soldiers. “The landing at Omaha Beach on the 6th of June in 1944 really threw a lot of American troops into the face of horrendous German fire. Many Iowans were part of a Ranger regiment that scaled the cliffs at Point Du Hoc,” Musel says.

It’s not know exactly how many Iowans may’ve participated in the D-Day invasion. Musel says the museum at Camp Dodge in Johnston has a lot of information on Iowan’s in World War Two. “We’re showing equipment that they used, clothes that they wore, telling stories about soldiers from Iowa, and actions during D-Day,” he says.

President Donald Trump is in Normandy, France taking part in ceremonies marking the 75th anniversary along with the Queen of England. Musel wishes he could attend and visit with the remaining soldiers who are there. “It would be engaging to be at the D-Day beaches just to be a part of that part of history,” according to Musel.

He says things have changed a lot since the soldiers who survived D-Day and other battles and returned to Iowa. Back then, those who wore the uniform didn’t talk much about what they had gone through.  “The soldiers from World War Two, they are more willing to share their stories today than they were for a long time,” Musel says. “They are good stories and stories that need to be told.”

The Iowa Gold Star Military Museum is free. Museum hours are 8:30 a.m. to 4 p.m Monday through Friday, and Saturday 10 a.m. to 2 p.m. You should use Northwest 70th Avenue entrance, which is open 24 hours a day. Photo identification is required for adults (age 16 and older) to gain admittance to Camp Dodge (a driver’s license is acceptable).