You are here: Home / Human Interest / NW Iowa food pantry that feeds 5,000 people per month is evicted from its building 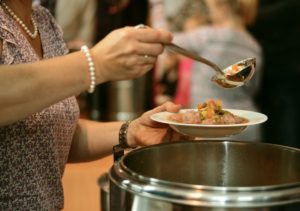 A Sioux City food pantry is looking for a new home. The Midtown Family Community Center is being evicted as its building, where it’s served people for 11 years, is being sold.

The center provides food to more than 5,000 people each month, including at least 3,000 children. Janet Reynolds, the pantry’s coordinator, calls the area a “food desert.”

“One, because there’s not a lot of grocery stores to purchase groceries,” Reynolds says, “and two, because of how densely populated the area is and the fact that the majority of the people that live in this are below poverty level.”

Reynolds says the pantry serves free school lunch to kids over the summer and has served 80 kids so far this week. She says many of the people who live nearby are heavily dependent on the center.

“Seventy-five percent of the people that come to my pantry, they walk,” Reynolds says. “They don’t own vehicles, they don’t have the ability to get to the store easily.”

The center has not had to pay rent or utilities. Reynolds says staff were told if they come up with a few thousand dollars to cover utilities, they can stay through the summer.