You are here: Home / News / Warren and Booker have the lead in paid staff in Iowa 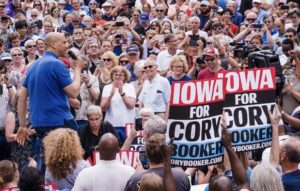 Two of the nearly two dozen candidates in the race for the Democratic Party’s next presidential nomination have the largest array of paid staff deployed in Iowa. Both have spent significant time here, too, personally making their pitches to Caucus-goers.

New Jersey Senator Cory Booker spent Memorial Day weekend in Iowa with 10 public events, capped with a barbecue that attracted a crowd of more than 500. Radio Iowa interviewed Booker during a segment of his 800 mile trip through the state in an RV.

“The earliest memory I have of coming to Iowa was on my grandmother and grandfather’s RV named the ‘Green Dream,’ when I was coming to one of our family reunions as a very little boy,” Booker said.

Booker, who turned 50 at the end of April, said he intends to be a “driving force” within the Democratic Party.

“I’m going to get up every single day and give you more fight than you’ve ever seen from a president before, fighting for people, fighting on the issues that matter, but I can’t fight alone,” Booker told Radio Iowa. “I’m not running to be your savior. I’m running to be with you in the fight for our democracy and everybody’s got to get on the field and, if we do that, we will make real change in all 50 states.”

Booker has called for licensing guns, similar to the way vehicles are licensed. He’s called for issuing $1000 “Baby Bonds” to every child born in the U.S. and, in May, Booker promised to create an Office of Reproductive Rights if he’s elected president. Linda Wormley of Newton said new abortion restrictions in states like Alabama have changed how she’s evaluating the presidential candidates.

“I hadn’t been paying as much attention to Booker,” she said, “and his strong position, coming out in support of women — it’s so important for us to hear that now, especially, that there are men who recognize the autonomy of women’s bodies.”

Booker, who has about 45 paid staffers based in the state, said his goal right now in Iowa is to focus on “retail” — meeting people face-to-race — and collecting voters’ data on his campaign’s “commit to caucus” cards.

“We’re the tortoise and not the hare,” Booker said, “and we’re slowly step-by-step building the organization and the operation to get across that finish line first.” 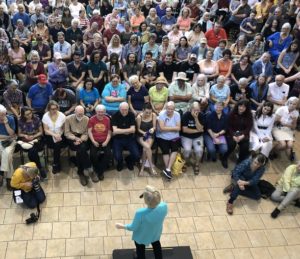 Massachusetts Senator Elizabeth Warren spent the Memorial Day weekend in Iowa as well, drawing crowds at half a dozen events.
Warren’s staff collects what it calls “Fight Cards” from Iowans who pledge to support her in the caucuses.

Warren puts policy details front and center, calling for cancelling up to $50,000 worth of an individual’s student loan debt and breaking up monopolies. Emily McCarty, who saw Warren in Ames last month, is on board.

“I just love her ideas and how she has an actual plan to implement these things, not just big ideas that sound good, but an actual way to get them done,” McCarty said.

McCarty, her sister and her niece each wore their “She Persisted” t-shirts to Warren’s town hall. Warren has more than 50 paid staffers in Iowa — the most of any candidate — and she’s made nine trips to Iowa this year.

“We’re going to build a grassroots movement and that’s how I’m going to be elected the first woman president of the United States of America,” Warren said during an appearance on Iowa Public Television this spring.

Warren, Booker and 17 other Democratic candidates will return to the state this weekend and speak at the Iowa Democratic Party’s fundraiser Sunday afternoon in Cedar Rapids.