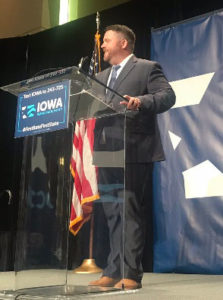 The 19 Democrats who spoke Sunday in Cedar Rapids at a party fundraiser focused on some common issues. Most promised to take steps to protect abortion rights and address climate change, but none mentioned impeaching President Trump.

New Jersey Senator Cory Booker warned that the 2020 race cannot be a referendum on Trump.

“Donald Trump is the worst president in the history of America, but defeating him is far from guaranteed,” Hickenlooper said. “The most effective attack the Republicans can level against us Is one of socialism.”

Hickenlooper was booed by California Democrats when he made a similar comment there, but the 1500 Iowa Democrats who listened to HIckenlooper and 18 other presidential candidates yesterday did not boo any of them.

That every woman makes her own decisions about her own body and has access to the care that allows that to be possible,” O’Rourke said, to cheers.

Former Vice President Joe Biden recently said “circumstances have changes” and he reversed his long-standing support of a federal policy that forbids federal tax dollars from paying for abortions unless the procedure will save the life of the mother or the pregnancy is the result of rape or incest.

Biden was not among the speakers at the Iowa Democratic Party’s event in Cedar Rapids. Biden attended his granddaughter’s high school graduation Sunday, but will be campaigning in Iowa tomorrow and Wednesday. President Trump will be in Iowa, too, touring a western Iowa ethanol plant Tuesday afternoon, then speaking at an Iowa GOP fundraiser tomorrow night.