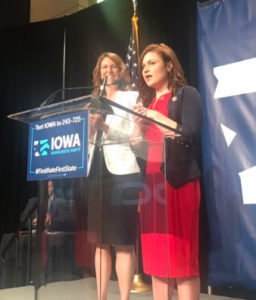 Three Iowa Democrats who beat incumbents in 2018 were featured at the party’s big fundraiser Sunday afternoon in Cedar Rapids.

Third district Congresswoman Cindy Axne of West Des Moines said she and Congresswoman Abby Finkenauer of Dubuque are two of the top 20 GOP targets in 2020.

“We are two of the most important seats to keep the House in congress. We are the history-makers and we are the Iowa girls that don’t back down,” Axne said, to loud cheers.

Finkenauer, Iowa’s first district congresswoman, told the Democratic activists there’s a “heck of a lot more work to do” in Iowa for 2020.

“We’ve got…three congressional seats that we’ve got to keep blue and we’ve got a fourth we’d better flip,” she said, to cheers.

Rob Sand, the Democrat who defeated Iowa’s two-term State Auditor in 2018, briefly addressed the 1500 Democrats in Cedar Rapids Sunday — with a cautionary note.

“It’s going to happen. There’s going to be that moment in the summer of 2020 where the polls are getting a little tight and someone’s going to say: ‘I don’t know. It could go either way,'” Sand said. “…The team that works the hardest will win.”

Some of the loudest bursts of applause for the presidential candidates who spoke at the same event Sunday came when they referred to Axne’s and Finkenauer’s wins in 2018.