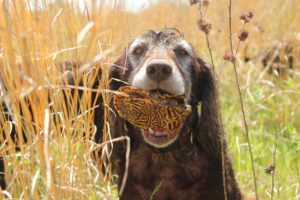 An eastern Iowa conservation group is taking an unconventional approach to tracking rare turtles on its land. A Montana man has trained his hunting dogs to find the reptiles for researchers.

John Rucker, and his four Boykin spaniels, are working on a nature preserve owned by Bur Oak Land Trust in Johnson County. The dogs find turtles, pick them up and bring them back to be counted.

“You will notice that as soon as they strike a scent trail, their tails will start wagging furiously, and then their whole demeanor becomes extremely excitable,” Rucker says.

Counting the creatures will help conservationists better manage the land. Ornate box turtles are a remnant species of the country’s vast prairies, where they co-evolved with wild bison. When European settlers plowed the grasslands, the turtles lost nearly all of their habitat. Now they’re considered “threatened” in Iowa. 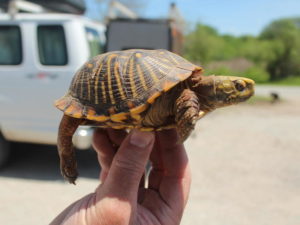 Rucker says the loss of even a single species can upset the balance of an ecosystem.

“If you have a symphony orchestra and the richness and the beauty and the sound comes from many different types of instruments, the woodwinds, the strings, the percussion — and the natural world is just like that,” Rucker says. “For every species that winks out, not only is it less beautiful, but it’s all interdependent.”

Seeing ecosystems regain biodiversity is breathtaking, Rucker says, and he feels privileged to have a small role in the process.

“To see the turtle dogs catching ornate box turtles within sight of wild bison herds after a summer rain storm was…it almost makes you want to just weep to think of all that we have lost and what it would’ve been like 200 years ago,” Rucker says.

With the help of Rucker and his turtle dogs, Bur Oak Land Trust is trying to bring back some of what’s been lost.