You are here: Home / News / Trump and Biden campaigning in Iowa today 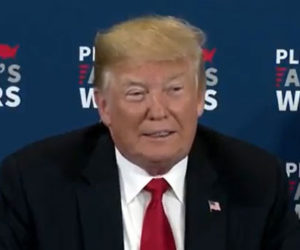 President Trump during a visit to Iowa in July of 2018.

President Donald Trump will be in western and central Iowa and former Vice President Joe Biden is campaigning in south central and eastern Iowa today.

Trump will visit a Council Bluffs ethanol plant and highlight his administration’s rule change, allowing year-round sales of gas with a 15 percent ethanol blend. Biden, at his first stop in Ottumwa, plans to accuse Trump of using farmers as “pawns” in Trump’s “erratic” tariff war.

“I hope while the president’s here he will also be talking about the exceptions that he’s been granting over and over and over that are creating real hardship for this industry,” Warren said.

Warren said as president, she’d appoint government officials who would end that policy.

Former Texas Congressman Beto O’Rourke held a town hall in Clinton Monday and was asked if he supports extending tax credits for biodiesel and cellulosic ethanol.

“Yes,” O’Rourke replied. “I’ve got to tell you, when we talk about liberating ourselves from a dependence on fossil fuels, we couldn’t do much better than to look at Iowa.”

“You through ethanol and biofuels have freed yourselves and your farmers from a dependence on commodity markets over which they had no control,” O’Rourke said, “creating value here at home, high-skill, high-wage, high-paying jobs.”

California Senator Kamala Harris campaigned in Iowa the past two days, telling reporters in Cedar Rapids the president’s “so-called” trade policy has been “an exercise in ego.”

The markets American farmers spent a decade or more developing in China “may be forever gone,” according to Harris, noting China is buying soybeans from Brazil instead.