You are here: Home / News / Trump, heading to Iowa, says farmers are his ‘best friends’ 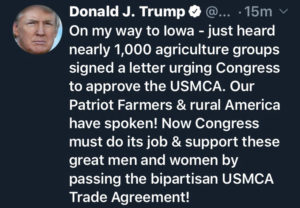 President Trump is scheduled to speak at a Council Bluffs ethanol plant later this  afternoon.

Trump intends to highlight his administration’s move to allow year-round sale of E-15 — gas blended with 15 percent ethanol. Trump told reporters as he left the White House today that farmers are his “best friends” and the president said — quote — “the best thing that ever happened to farmers was me.”

Trump will be in West Des Moines early this evening to speak at an Iowa GOP fundraiser.

Trump also commented on former Vice President Joe Biden, who is campaigning in Iowa today.. Trump called Biden “a dummy” and “a loser.” Biden — speaking early this afternoon in Ottumwa — said on issue after issue, Trump makes “the wrong choices” and “is an existential threat to America.”