You are here: Home / Agriculture / Dairy farm near Sioux Center uses robots to handle the work 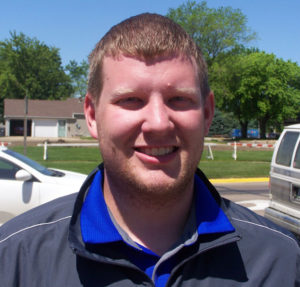 A dairy farm in northwest Iowa is hosting an open house today to show off a unique series of robots that keep the operation running smoothly.

Scott Schroeder, executive director of the Western Iowa Dairy Alliance, says the farm of John and Sharon VanderWaal near Sioux Center is one of the most technologically advanced in the state.

“Rather than seeing a milking parlor, you will see four robots in the pen with the cows,” Schroeder says. “The cows can go in up to seven times each day. They’ll walk into the pen with the robot and a gate will shut so no other cows can interrupt the cow being milked, and the milking unit will attach itself to the cow and milk the cow.”

Long gone is the three-legged stool and metal bucket, as the robots work quickly to do their job in the pen.”While the cow is in there, they also get some candy-treats, that’s the incentive that draws the cows into the robot,” Schroeder says. “When they are finished in about seven minutes, the machine will detach and the cows are let out and the next one is ready to come in. Once they’ve been trained, they come in on their own. You don’t ever have to try and force them to go in. They freely are able to go in to the robot.”

Besides the robotic milking system, Schroeder says the VanderWaal’s have implemented several other other robotic advances. “They also have some robotic pen scrapers so you can see how they keep the pens clean,” Schroeder says. “They also have a robotic feed pusher to make sure when John feeds his cows, that the feed is fresh and it gets rotated so they always have feed and water.”

Schroeder says the VanderWaal’s started using the robotic method in 2017. The farm has about 250 cows and is one of the smaller dairy farms in the area. He says Sioux County has the most dairy cows in Iowa, with each cow representing an economic benefit of $23,000. The J & S Dairy Farm in Maurice is hosting the open house from 4 to 8 P.M.