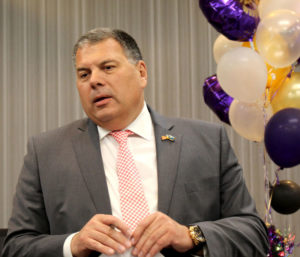 Representatives from Kosovo are in central Iowa this week to promote a new program offering tax breaks and free land to Iowa businesses to build operations in that southeastern European country.

Hollie Zajicek, economic development director for the Des Moines suburb of Norwalk, says the U.S. and Kosovo have exchanged delegations around education and government. Now, the relationship is reaching the business world.

“They’re learning from us,” Zajicek says. “We have a lot of colleges involved over there. So the next step really is just growing their economy and building companies and providing jobs.” Iowa and Kosovo have developed close ties since the Iowa National Guard was deployed there with NATO forces to keep the peace with Serbia.

At a meeting in Norwalk with community leaders, Erolld Belegu, an advisor to Kosovo’s prime minister, said his country has something Iowa lacks: young, unemployed workers. “Seventy-percent of the population is under 35. They’re eager to work,” Belegu says. “A lot of them need jobs and a lot of them need better pay jobs, as well.”

To encourage investors, Kosovo is setting aside 12-hundred acres adjacent to the city of Gjakova to be parceled out to American companies. Iowa and Kosovo became sister-states in 2013, and Kosovo is the only foreign country with a consulate in Iowa.