You are here: Home / Fires/Accidents/Disasters / Section of I-29 reopened second time after flooding 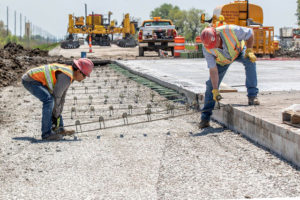 Work on I-29 near Crescent.

A section of interstate in southwest Iowa that was reopened after flooding in March and then closed again in May is now back open.

DOT planner Scott Suhr says traffic started moving Wednesday afternoon on Interstate 29 from Interstate 680 to the Missouri border. He says there is some more work to do on that stretch. “A little bit of shoulder repair that will need to be done,” Suhr says, “but some of the measures that we installed this spring into April and May held up — and we don’t have near the damage that was done back in March.”

Suhr says they used one repair technique in particular that held up after the floodwater came up a second time. “We installed a product called flex-a-mat, and it basically stabilizes the slope near the shoulder. And that helps the water run over the should without actually degrading underneath the pavement,” Suhr explains. “And we actually had a layer of asphalt that helped hold that in place too. So, between those two things — it pretty much helped keep the pavement and shoulder from being undermined.” 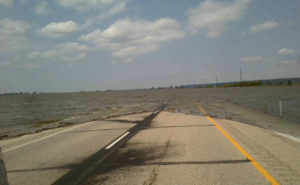 June 1st photo of I-29 near Crescent.

Suhr says they have been trying different techniques like this as they fix the miles of flood-damaged roads. “Obviously no one wants to go in there and do things twice, so we are trying to find ways to protect ourselves in the event of another flooding,” Suhr says.

There are still several stretches of highway that floodwaters are preventing from being repaired and reopened. “We got U.S. 34, Iowa 2 and portions of I-29 south of U.S. 34 to the Missouri border that are close. And we’ve got an area on I-29 in Council Bluffs where water is over the roadway. It’s kind of a low-lying area. And then we’ve got water over the roadway at the 67 mile maker,” according to Suhr. “So, we are basically waiting for the water to recede so we can inspect the pavement.”

They’ve had some dry days to get work done, but Suhr says they know the potential for flooding remains. “We just have to 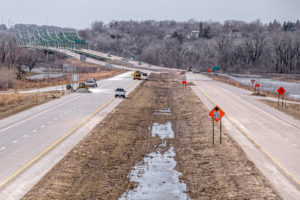 I-680 near the Nebraska border.

(Photos courtesy of the Iowa DOT)