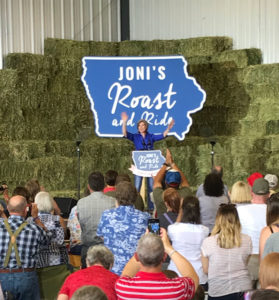 Republican Senator Joni Ernst kicked off her bid for re-election in 2020 this weekend.

“You and I know that this fight isn’t over and there’s more work to be done to push back on the coastal liberal insanity,” Ernst said Saturday, “to stand up for Iowans.”

Ernst held her fifth annual “Roast and Ride” fundraiser, starting Saturday morning with a 49-mile motorcycle ride from Des Moines to Boone, then a barbecue Saturday afternoon at the Central Iowa Expo grounds. Ernst spent much of her half-hour speech in Boone criticizing the Democratic presidential candidates.

“Can I count on your help to stop them?” Ernst said, and the crowd cheered in the affirmative. “That’s right. I knew you would.”

“We need all of you to go out and become part of Joni’s campaign. It’s going to be a competitive race. Iowa is always competitive,” Haley said. “We can’t take anything for granted.” 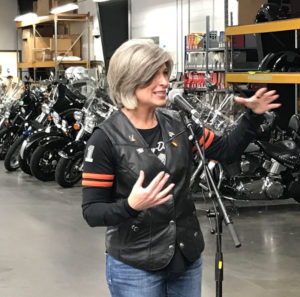 “I know that this is an important seat that the Democrats would love to have back, but I’m going to make them fight for it,” Ernst said during a news conference Saturday morning, “and they are going to fail.”

Three Democrats have announced they’re running for their party’s nomination, to face Ernst in 2020. Ernst did not mention her potential Democratic competitors Saturday, but other speakers at her campaign kick-off did. Republican Governor Kim Reynolds mentioned Eddie Mauro and Theresa Greenfield by name.

“There may be more and I’m sure they’ll all compete to see who can run the fastest to the left,” Reynolds said.