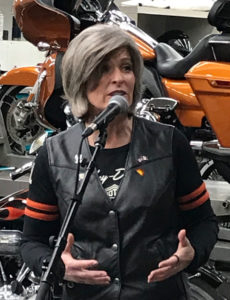 Joni Ernst speaks with reporters at her annual fundraiser.

Senator Joni Ernst says she doesn’t want a war with Iran — but Ernst says Iranian leaders are on a path of “increasing desperation” that eventually would require a military response.

Ernst, a Republican, serves in the U.S. Senate Armed Services Committee. She said in a written statement released Monday that military action would be justified if Iran doesn’t stop its aggression. Iran has announced it plans to violate a key part the nuclear agreement it struck with world powers in 2015 and President Trump is sending a thousand troops to the MIddle East in response to that as well as to recent attack on oil tankers in the region that the U.S. secretary of state says was orchestrated by Iran.

“We will keep an eye on them,” Ernst told reporters Saturday. “We will make sure that we have an appropriate response level ready to protect our men and women in the Middle East.”

Iran has announced it will boost its stockpile of enriched uranium beyond the limit set under a 2015 nuclear deal with world powers. Ernst said while military action would be warranted if Iran continues to be provocative, she hopes it doesn’t come to that.

“I certainly hope not,” Ernst said during the news conference. “Just as with any other hot spot or country around the world that poses a threat to the United States, we always do have contingency plans.”

Ernst, in her written statement, said Congress “must play an integral role” in deciding whether those contingency plans are activated.