You are here: Home / News / Vilsack says USMCA ratification would be a victory for farmers, economy 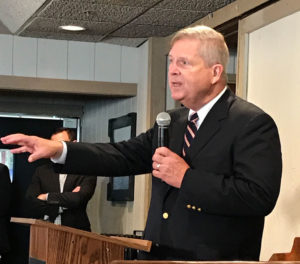 “Having this agreement passed creates optimism, creates a hopefulness about the future,” Vilsack said Monday, “which is incredibly important for agriculture and for the food industry, to have that optimism that things are going to be better.”

Vilsack hosted a forum early Monday morning in central Iowa with representatives from most of the state’s ag commodity groups.

According to Vilsack, 28 percent of the American workforce is employed in the food and agricultural sector. Vilsack is now president and CEO of the U.S. Dairy Export Council. He said the USMCA preserves Mexico as a market for about 30 percent of all U.S. dairy products. The new agreement also opens Canada to more U.S. dairy sales, Vilsack said.

Drew Mogler of the Iowa Pork Producers Association said the deal is important because one out of every four hams produced in the U.S. ends up in Mexico.

“Last year, Iowa exported about $700 million worth of pork to both Canada and Mexico,” he said. “This year our exports have dropped off a little bit, volume-wize, down to Mexico, so getting some certainly back (for) producers is important for us.”

Greta Irwin of the Iowa Turkey Federation said Mexico is the number one foreign market for U.S. turkey and the deal could increase turkey exports to Canada by up to 30 percent.

“This type of agreement is huge for our industry,” Irwin said.

Kevin Studer of the Iowa Corn Growers said the USMCA is the kind of “break” farmers need.

“This spring has been a mess. We all know it. We’ve got to get this anxiety off the table,” Studer said. “Let’s clear the deck on USMCA. Let’s get our trade people to be able to focus on getting China done.”

The U.S. Mexico Canada Agreement is also important for the state’s biofuels industry. Monte Shaw of the Iowa Renewable Fuels Association said Mexico is an emerging market for Iowa-produced ethanol.

“If that market were to go away because this (USMCA) fell apart and we actually pulled out for some period of time from NAFTA, that’d be like shutting down three and a half plants,” Shaw said.

The Trump Administration has not yet forwarded the new trade agreement for North America to congress. Once that happens, the U.S. House and Senate will have 30 days to ratify it. Vilsack said it would be best to have that vote this year, rather than having it happen in 2020 — during a politically-charged election year.