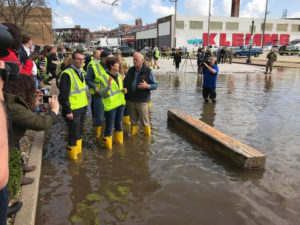 Business owners in downtown Davenport are calling on city administrators to take more action to support their flood recovery.

A newly-organized group called the Downtown Davenport Business Coalition wants assurances the city will protect them in the future and be flexible as they rebuild. Entrepreneur Dan Bush has started three businesses in downtown Davenport.

“Especially with people taking total losses in their spaces and trying to work through insurance companies, they’re really trying to figure out can I reopen and how can the city work with us to get re-opened? Both in a timely fashion, expediting plans, and also working with us on budget,” Bush says.

Bush co-signed a letter the coalition published in The Quad City Times. The group is calling for a flood plan that would expand protections for private and public assets. Dylan Steil co-owns a restaurant called Roam, one of a string of new businesses to open in the months before the historic flooding.

“We have a serious risk of just losing that momentum, having a negative image come back to the downtown area — losing not just businesses coming down, but visitors as well,” he says, “so we just need…to keep the image alive that says: ‘No, downtown Davenport’s committed to providing a quality time, no matter what happens to us.'”

Business owners say they need assurances from city leaders as they make decisions on whether to rebuild or close their doors for good.