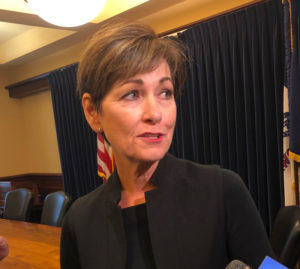 Governor Kim Reynolds says “a lot of factors” went into her decision to replace a key agency director. Jerry Foxhoven’s exit as director of the Iowa Department of Human Services on Monday came two years after she appointed him to the job.

“I’ve been reshaping my team over the last several months,” Reynolds said late this morning, “so that I can follow through with the priorities that I’m working on for Iowans.”

Reynolds was asked today by statehouse reporters if there were any issues with Foxhoven’s performance or behavior — or any disagreements she may have had with Foxhoven about the agency’s direction.

“I’m not going to get into that. There were a lot of factors that went into that decision,” Reynolds replied. “I appreciate Jerry stepping in at a really tough time and helping with the transition. I appreciate that a lot. I’ve just made the decision to go a different direction.”

Reynolds appointed Foxhoven as the DHS director six days after she took over as governor when Terry Branstad resigned in 2017, in the middle of his sixth term as governor. Reynolds said she will conduct a national search for a new director for the state’s largest agency, someone to carry out her new plans.

“There’s a lot of different things that we’re working on. We’ve got a lot of working groups that are talking about new initiatives that we want to do moving forward and so that’ll be part of what we lay out next year. We’ll be working on it all summer, but you know it’s bringing new people in and really focusing on more continued collaboration across agency lines,” Reynolds said. “That is really important to me.”

Reynolds said later this week she’ll name a new director for the state agency that handles personnel matters in state government. Next week, Reynolds plans to name a permanent Department of Natural Resources director. An interim manager has been at the helm of that agency for more than two years.

Reynolds said she’s looking to promote a “one team culture” in state government. Earlier this month she named a new director for the Iowa Department of Corrections. She named a handful of new state administrators this past January as well, around the time she took the oath of office for a full, four-year term as governor.