You are here: Home / Agriculture / Barge traffic moving again on the Mississippi River 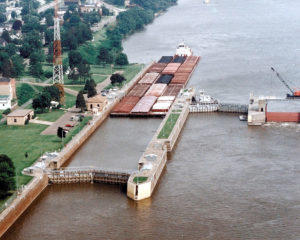 A barge at Dubuque.

A critical component for moving Iowa grain to the global marketplace is finally back on track.

After months of widespread flooding on Iowa’s eastern and western borders, the U.S. Army Corps of Engineers reports barge traffic is moving on the Mississippi River again. All of the locks and dams on the river have re-opened.

Only a couple of barges were allowed to pass through the locks at the Quad Cities since March. The chief of operations at Rock Island says those locks have been closed longer this year than ever before.