You are here: Home / Agriculture / ISU research finds a type of charcoal could slowly release fertilizer 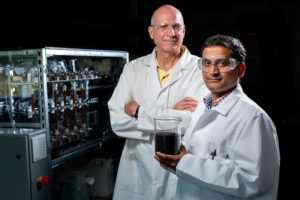 While working with a type of charcoal called biochar, they realized it could basically act as a sponge to capture phosphorus from agricultural runoff. ISU researcher Robert Brown says the biochar “sponge” can then release phosphorus slowly, preventing it from running off.

“Even after it’s been adsorbed, it retains on that charcoal and only very slowly is released, released at a rate that is more commensurate with what the plant needs as a nutrient rather than it simply being all washed down the stream,” according to Brown.

With the biochar, farmers could have more flexibility with fertilizing, since nutrients could be released over a growing season rather than a quick shower. ISU researcher Santanu Bakshi says the biochar acts sort of like a medicine that takes longer to go through the body, producing fewer side effects.

Bakshi says, “If we use that in the field, if there’s a rain, there would be little loss of the phosphorous, or no loss, but plants will get their essential phosphorus in time.” The researchers want to know if the biochar can also capture nitrogen, so they plan to scale up their research and test in the field in the fall of 2020.