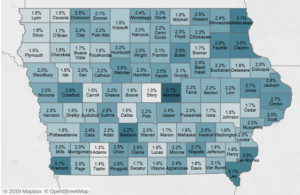 Iowa’s unemployment rate in May was 2.4%, unchanged for the past 11 months.

Nearly 41,000 Iowans were unemployed last month. That’s about 400 more than were getting unemployment benefits in April. However, the state’s unemployment rate remains steady since more than 31,000 people have entered the Iowa workforce since May of last year.

State officials say Iowa businesses added about 1100 jobs to their payrolls in May, the second consecutive monthly gain after job losses in January, February and March.