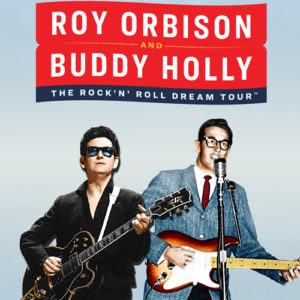 A historic theater in downtown Cedar Rapids will host a double-bill concert this fall that features two men who were huge rock-n-roll stars in their era — both of whom have been dead for decades.

Buddy Holly and Roy Orbison will be appearing on the Paramount Theatre stage as life-size holograms.

“To the best of my knowledge, this is the first time we’ll see this type of thing in Iowa,” theatre spokeswoman Katie Ripke says, “so I really encourage people to get their tickets early for this.”

The one-night-only performance will feature a live band, back-up singers and remastered audio of the musical pioneers’ greatest hits. Ripke says she’s never booked an act for the 16-hundred seat theater quite like this, since it spotlights two artists who, well, aren’t really there.

“It is the first time it’s been a hologram,” Ripke says. “We’re really excited about it. It’s kind of serendipitious that one of the holograms is going to be Buddy Holly with the ties that he has to Iowa. It’s going to be a really cool performance and we’re excited to bring this technology to Cedar Rapids.”

Holly’s final concert was in Iowa in February of 1959. His plane crashed near Clear Lake after a show at the Surf Ballroom, killing the 22-year-old Holly and also claiming the lives of rock-n-rollers Richie Valens and the Big Bopper, as well as the pilot. Sixty years after losing his life in Iowa, Holly’s image will be brought back to life in full color, singing and playing guitar. The Rock ‘N’ Roll Dream Tour also revives Orbison, who died in 1988. One of his biggest hits was “Oh, Pretty Woman,” which hit number-one in 1964.

“The visuals that the holograms provide is amazing, it’s really cool,” Ripke says. “It should transport people back to the ’50s when they were at the height of their popularity.” Tickets went on sale today for the show’s only Iowa stop on October 22nd.

See a sample of the Buddy Holly hologram concert here.