You are here: Home / News / Summer returns with another big dump of rain in some areas 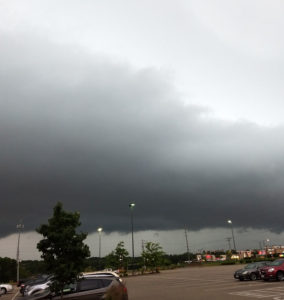 Spring was no lamb, and summer is coming into Iowa this morning like an angry, wet lion.

Wide sections of the state are being peppered with powerful thunderstorms, strong winds and hail, while a Flash Flood Warning was issued for several west-central Iowa counties.

Meteorologist Frank Boksa, at the National Weather Service, says some areas got four inches of rain this morning with more on the way.

“Each of these storms is capable of producing a quick half-inch or so of rain and the stronger storms will be producing heavier rainfall,” Boksa says. “The ground is already saturated. We’ve had a couple inches of rain already. With additional storms, we’re expecting ponding of water.”

Urban areas may see street flooding while some rural areas of Iowa have already endured months of high water across tens of thousands of acres of farmland. “The ground is pretty saturated and it can’t hold as much water, so once the rain falls, the ground quickly takes what it can and the rest is all going to be runoff, and if you get repeated rounds of this, the runoff is just going to increase,” Boksa says. “Concrete isn’t going to absorb it so it’s going to run somewhere.” 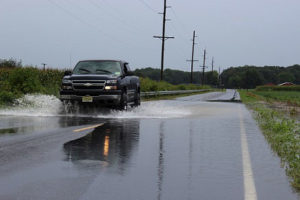 Flash flooding is a possibility in some areas.

Perfectly on cue, warmer weather is moving into the state on this first day of summer and it’s raising the potential for several weather this afternoon and tonight. “We’re going to get more warm air and more moisture coming in and the potential will be for larger hail, up to golfball-sized, and damaging winds,” Boksa says. “If we should get a line of thunderstorms, there might be the potential for a tornado or two.”

Foul weather will likely last much of the weekend and into Sunday night, he predicts, with clearing, more seasonal weather on Monday.