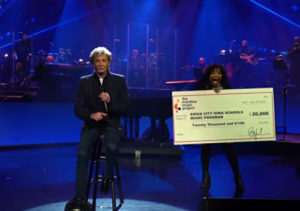 A singer and songwriter who recorded nearly four dozen top-40 hits is helping aspiring musicians in a northwest Iowa school district. Barry Manilow announced the winners of his Manilow Music Project on stage in Las Vegas.

“In second place is Sioux City School District from Sioux City, Iowa,” Manilow said. “They get $20,000 worth of musical instruments.”

The Manilow Music Project has distributed $10 million over the past several years to enhance music education in U.S. schools. Sioux City was among the schools that submitted videos for the latest round of awards, hoping to win the top prize of $100,000.

“My team and I looked at all of the videos and every school was filled with talent,” Manilow said on stage in Vegas. “The teachers were just amazing. They were so committed, so sincere and so in love with their students, and the students were so in love with the music classes.”

Manilow has said the high school he attended in Brooklyn was classified as the “most dangerous” school in the country and he found refuge in orchestra class and wants to ensure the students of today have access to quality musical programs at school.

Manilow has performed twice in Sioux City during his more than 50-year career.