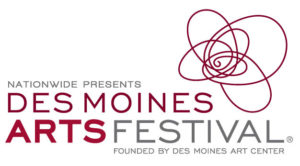 Organizers of the Des Moines Arts Festival are expecting the largest-ever crowd this coming weekend as they anticipate breaking a quarter-million visitors over the three-day event.

Fest spokeswoman Belle DuChene says there will be live music on multiple stages, performing arts, workshops, community outreach programs, food — and plenty of amazing artwork.  “We have 177 professional artists that are coming in from all over the place,” DuChene says. “They’re actually coming in from 33 different states and we have a couple of folks from Canada as well.”

The weekend spotlight will also shine on a special group of home-state artists. “We have our Emerging Iowa Artists and those are nine folks who are involved currently in an Iowan school for the arts,” DuChene says. “We’re hoping to give them their first big exposure to their soon-to-be-blossoming careers.”

A host of elementary school students from central Iowa will also have their works featured at the event. Virtually all of the artwork on display will be for sale, with prices ranging from prints at just a few dollars up to several thousand dollars — in all mediums.

“We have a little something for everyone,” DuChene says. “My entire family comes. We have the ladies of the family who love the jewelry. My dad loves the ceramics. We have paintings. We have sculpture. You name it, we have it, across the board.” There’s also a festival within the festival, the Interrobang Film Festival which is hosting 54 film screenings from nine different countries.

The Arts Festival runs Friday through Sunday at the Western Gateway Park in downtown Des Moines.