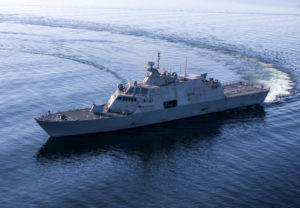 The naval warship christened with the name of a northwest Iowa city continues to undergo testing.

“Putting the ship through its paces is fun,” says Kevin O’Brien, the commander of the USS Sioux City, a combat ship designed for deployment near shorelines. “It’s a fun ship to drive. It goes really fast. We can shoot while we’re going fast.”

Testing of the vessel will continue through the end of October.

“If you ask any one of the crew members…there are absolute challenges,” O’Brien says. “…We bring it through its paces, we document, we pull it into the dock and then we’ll fix everything that we need and then we’ll be ready to go.”

O’Brien says after this testing period, the U.S.S. Sioux City will undergo what’s considered a short “maintenance phase” and be ready for general naval operations in early 2020. O’Brien and three of his crew members were in Sioux City last week. He says the link to the citizens of Sioux City is important.

“We could not be more proud every day when we put on our hats that say: ‘USS Sioux City,'” O’Brien said. “This is a community that has welcomed us, that has supported us when we’re here and, more importantly, it supports us when we’re at sea. We receive countless letters, care packages from the folks of this region and this region is absolutely steeped in service.”

City officials presented Commander O’Brien with a Sioux City flag to fly on the vessel while it is at sea. O’Brien has presented Sioux City with an American flag that was flown on the U.S.S. Sioux City during its trip to Norfolk, Virginia.