You are here: Home / News / Blue Angels lead the return of the Quad City Air Show 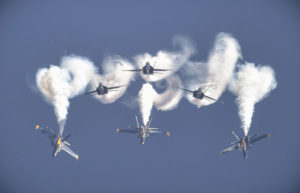 The top air show attraction in the world, the U.S. Navy Blue Angels, will be performing its precision demonstrations over eastern Iowa this coming weekend.

Ken Hopper is chairman and founder of the Quad City Air Show, which ran for 30 straight years at the Davenport Municipal Airport, then took several years off, and is now returning for a 31st run. “You can’t get the Blue Angels every year, you apply for them two years out,” Hopper says. “They get 800 or 900 requests every year and they do 35 shows. The point was, I wanted to wait a couple of years until I got the Blues back and then said, okay, let’s do it again.”

Hopper estimates they’ll attract 80-thousand people during the two-day event. The Blue Angels were founded in 1946, the year after World War Two ended, as a way to maintain the recruiting of talented pilots. “They were the first-ever military jet team in the world and the Navy’s thought of as pretty unique flying when you can land on a runway that moves and shifts and goes up and down,” Hopper says. “There’s just something about them. They fly closer than any other team. They fly an average of 18 inches apart.”

Gates open at the airport both Saturday and Sunday mornings at 8 for the static displays of dozens of military and civilian aircraft, while the flying portion of the airshow begins at noon each day. The aerial entertainment will conclude each day with the Blue Angels, but there will be plenty to see before then.

“We got probably the best civilian team in the world, the Aeroshell Aerobatic Team,” Hopper says. “We got probably the best individual performer in the world, Kirby Chambliss and his entire Red Bull Team. We got a family that’s been around aviation forever, the Shetterlys, it’s a father and two sons and they have really come on strong in the past few years.” A host of vintage warbirds will be flying, including a P-51 Mustang, an F-4-U Corsair, a B-25, and a P-38 Lightning, of which there are only seven still flying in the world.