You are here: Home / Outdoors / Planes to drop material to curb the mating of gypsy moths in Jackson, Allamakee counties 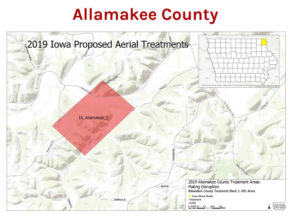 Area that will be treated for gypsy moths.

Residents in Allamakee and Jackson counties in eastern Iowa might notice some low flying planes over wooded areas in the next couple of days.

Iowa Department of Agriculture gypsy moth coordinator, Mike Kintner, says the planes are dropping material to try and limit the spread of the European gypsy moth. “It’s an invasive regulated insect. It’s a moth that defoliates mainly hardwood trees and they’re kinda starting to move into the northeast part of the state — and we kind of want to keep those numbers down,” Kintner says.

They aren’t trying to kill the moths — they are trying to kill their ability to reproduce. “The product that we’re treating with is a mating disruption product — so it basically disrupts the mating — it’s not actually killing the insect,” according to Kintner. “It’s aerially applied to the area and then what happens is there’s a scent that basically masks of the area and then it disrupts the mating. And the result is there’s not as much offspring.” 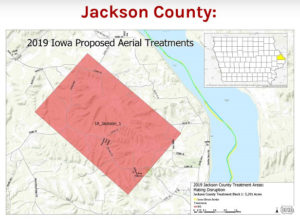 One area to be treated in Jackson County.

The material dropped from the planes is an organic-certified, food-grade substance that hits the tree leaves as small waxy droplets that slowly release a synthetic gypsy moth mating pheromone. Kintner says they’ve held informational meetings in the area to let people know about the flights and the planes should be flying in wooded areas where there aren’t any people. He says the number one thing they want people to know is that the planes will be in the area flying low.

The first applications are scheduled for the morning on Thursday (June 26th) and should be done by midday. The schedule does depend on the weather. “You can imagine, we are talking about aerial applications from a plan and the ones we are going to be planning to use this week are very tiny droplets,” Kintner says. “Too much wind or there’s rain –we do hold off to be sure there’s conditions that are beneficial to put those products on.”

The treatment in Allamakee County will focus on a 691-acre rural area southeast of Dorchester. Two rural areas west and northwest of Bellevue totaling 10,330 acres will be treated in Jackson County. Kintner says they will follow up on the treatments to see how they worked. 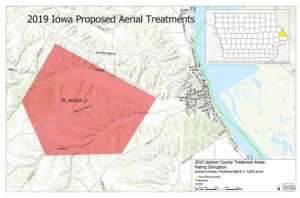 The second area to be treated in Jackson County.

“We have already set traps around much of those areas we are going to be treating — actually throughout other parts of Iowa too. So we’ll be able to get a good idea on how well these treatments worked because we put these traps out,” Kintner explains. “Later in the summer will go pick those up and see how many moths are caught in those areas that we treated.”

Kintner says the moths have been slowly spreading for years from the eastern United States and are well into Illinois and Wisconsin.