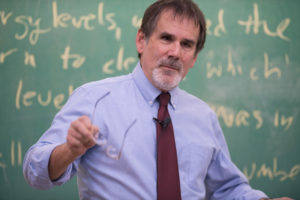 NASA is awarding the University of Iowa a large grant to study the mysterious interactions between the magnetic fields of the Earth and sun.

At $115 million, it’s the UI’s largest-ever research project. Craig Kletzing, a professor in the UI physics and astronomy department, says they’ll design and build two satellites that will be placed in orbit about 300 miles up.

“We know that energy from the sun gets brought into the space around the Earth but there’s a big question about whether that’s something that turns on and off in time, like a light switch going on and off, or whether when we see the certain patterns that we do that it’s happening in various different places,” Kletzing says. “The question has been around a long time.”

The twin satellites will be designed and built over the next three years, and once launched, they’ll collect data for a least two more years about what’s called the “solar wind.” “We’re trying to study the weather of space, if you will,” Kletzing says. “We actually use the same kind of terminology. We talk about precipitation of particles and we talk about storms and things like that. The sun is constantly sending energy at us. Light, of course, which mostly heats our planet, but there’s also this constant stream of particles.”

The Earth’s magnetic field acts as a shield for most of those particles, but a fair amount still get through. The satellites will be called TRACERS, Tandem Reconnection and Cusp Electrodynamics Reconnaissance Satellites. The TRACERS won’t be physically constructed in Iowa.

“We are partnering with a company in El Segundo, California, that are experts on how to build the actual satellite, structure and all that stuff themselves,” he says. “What we do is, we guide the project and we’re building two of the measurement systems that we’re going to use on this and then we partner with them, integrate the instruments onto the spacecraft, and then we will also be partnering with NASA for the launch of these spacecraft.”

A core team of 15 to 20 UI researchers will lead the project, with the help of perhaps 40 more people on the Iowa City campus. The UI will also get support on the effort from Auburn University, Dartmouth College, and UCLA. Kletzing says this is a “career milestone” for him to be heading up this endeavor.

“We really have an absolutely great team with all the different institutions that are involved,” Kletzing says. “Working like the dickens to put together a good proposal to convince NASA that we can do this and we have the right science and all those kinds of things. They looked at our project and said, ‘Yep, that’s the one we want.'”