You are here: Home / Crime / Courts / Body found at apartment may be missing Waterloo woman 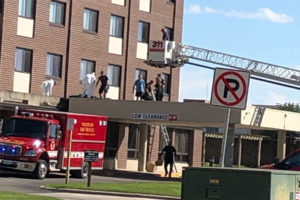 A woman’s body was found on the canopy of this apartment complex in Waterloo.

Waterloo police are investigating whether a body found outside a downtown high-rise apartment building is that of a missing woman.

​The probe began late Tuesday afternoon when someone discovered a woman’s body on top of a canopy that covers the entrance to the Cedar River Tower Apartments.

Waterloo police say the body had been there for an extended period of time and they’re awaiting autopsy results before confirming her identity and cause of death.

Police believe the body may be that of 54-year-old Sharla Davis of Waterloo, a missing resident of the building who authorities have been searching for the past 10 days.

According to police, Davis was last seen June 15th in downtown Waterloo and her last social media activity was on June 16th.