You are here: Home / News / Several dogs seized from property in Exira 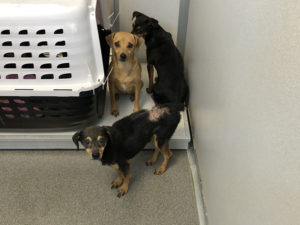 Three of the 13 dogs seized from a property in Exira.

Three weeks to the day after responding to Iowa’s largest-ever animal hoarding case, the Animal Rescue League of Iowa removed more than a dozen dogs from a property in western Iowa’s Audubon County on Tuesday.

Tom Colvin, the league’s CEO, says the neglected dogs were all being kept together outside in a muddy, tarp-covered, chain-link dog run in the town of Exira. “There just was this compilation of 13 dogs that needed to be rescued,” Colvin says. “There were several of them with severe skin issues, a lack of hair, that type of thing, and these dogs definitely need to be removed out of that situation.”

The shy dogs had not been well-socialized, some appeared to have never been walked on a leash before and some had never even been named. Colvin says it was heart-breaking to see the animals in that condition. “They primarily just lived in this dog kennel,” Colvin says. “Getting them out, getting them with our volunteers who are so good at calming these dogs down, working with them, getting them feeling better and getting them interacting with people. I’m very optimistic about their adoption chances.”

No information is being released about the owner of the dogs. “I’m not aware that any charges are going to be made at this point,” Colvin says. “I think the individual was very cooperative when this all came about. They were very cooperative to seek help.”

Three weeks ago, the ARL began the process of rescuing and recovering what ended up being 380 cats, living and dead, from a property in Madrid.