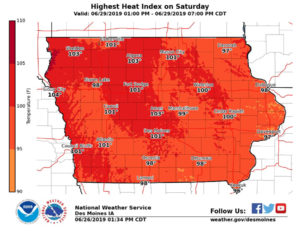 It’s steamy hot this afternoon in Iowa and forecasters say it’ll get even hotter tomorrow and through the weekend.

Meteorologist Cory Martin, at the National Weather Service in metro Des Moines, says summer’s not even been here for a week and it’s already time to crank up the fans and air conditioners.

“Temperatures are going to be getting up into the 90s along with the humidity that’s already in place, it’s not going to go anywhere,” Martin says. “You combine that kind of heat and humidity, we’re looking at heat indices getting into the low 100s as we go through tomorrow and into the weekend.”

As yet, no advisories, watches or warnings have been issued in Iowa due to the heat, but that could change soon. “This will be the hottest weather we’ve had so far this year,” Martin says. “Here in Des Moines, we’ve only seen two days where we’ve cracked 90 degrees which is a little behind what we typically see. It’s going to feel miserable for most people who are outside, just because we’re not used to it.”

When the heat index gets into triple-digits, Martin says it’s very important to take the heat seriously and take precautions if you’re working — or playing — outside. “The last time we saw 90-plus degrees in Iowa would’ve been earlier this month. June 5th, I believe, quite a few locations in central Iowa cracked 90 degrees, but at that time, we didn’t have the same level of humidity,” Martin says. “It’s going to feel like our typical dog days of summer where it’s just hot and humid. Make sure, during the peak heating times, you limit your time outside and stay hydrated.”

The extended forecast calls for highs in the 80s and 90s across much of Iowa at least through next Wednesday.