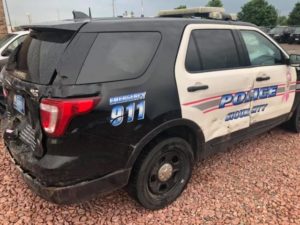 Sioux City police SUV that was struck by another car.

A Sioux City Police officer was injured Wednesday morning as he was assisting at the scene of a traffic accident on the Highway 20 bypass.

Police Lieutenant Chris Groves says the officer was seated in his SUV around 6:45 a.m. helping to direct traffic when the SUV was struck by a passing car. He says the officer saw the car in the rear view mirror and observed it starting to fishtail as it tried to slow to avoid the patrol car, but ended up hitting it in the rear.

Groves says the side airbags deployed and the officer sustained minor injuries. He says it’s not known yet why the driver didn’t see the patrol vehicle and its flashing lights.

The driver of the car will be cited and was taken to the hospital by ambulance with non-life threatening injuries.