You are here: Home / Military / World War II tour of B-17 continues in Mason City 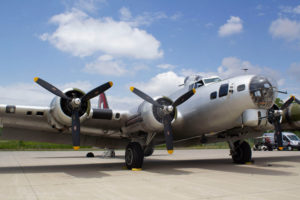 A restored World War Two-era bomber will be flying into Mason City Friday, offering tours and flights to small groups of passengers.

While 12,000 of the Flying Fortresses were built during the war, only a few remain and perhaps ten can still fly. James Sassaman, of Ames, served as a navigator in B-17s on nearly three-dozen missions over Europe in 1944.  “Every mission, you’d be scared,” Sassaman says. “Yeah, you’d always get a few holes in your airplane from being shot at.”

Sassaman, who’s 94-years-old, took a ride in the historic plane earlier this week when it visited Ankeny. He says he never expected the planes would become something civilians would pay money to explore. The B-17, called Aluminum Overcast, is maintained by the Experimental Aviation Association, which takes it on tours around the country. 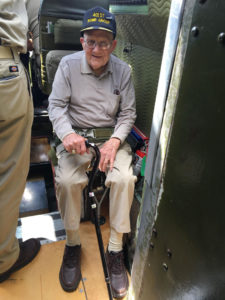 Retired commercial pilot Rick Fernalld volunteers to fly the bomber to keep its history alive. “The mission of the airplane was to destroy the war-making capability of the Germans so they could end the war,” Fernalld says. “So, it was part of that process, in addition to the foot soldiers and sailors that participated. It was a big deal.”

The B-17s dropped more bombs than any other U.S. aircraft in World War Two. Fernalld has a very personal connection to this type of plane, even though it can be very challenging to fly. “My father was a tail-gunner, so that’s my attachment to the airplane,” Fernalld says. “I refer to her as ‘The Beast’ because she’s always shopping to try to get the best of you.”

Originally built in the 1930s, the bomber has had some upgrades but is generally meant to look and operate like it did during the war. Because military aircraft are not intended to carry civilian passengers, the EAA has a special exemption to allow it to offer flights. It will be in Mason City through Sunday.