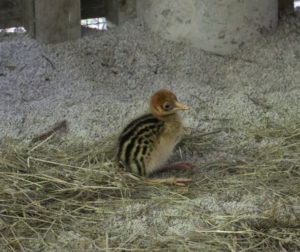 The zoo’s Ryan Bickel says it’s a creature with which many Iowans may not be familiar. “When you think of a cassowary, think the size of an ostrich or an emu,” Bickel says. “They’re a very large, flightless bird. They can weigh up to 100 pounds.”

The chick was hatched June 10th and weighed only around ten ounces. It’s now up to about 16 ounces and appears very alert and healthy. Bickel says they’re very rare, unusual-looking birds. “They are unique in that they have this sort of crown called a ‘casque’ on the top of their head and they have a bright blue neck and a really bright red waddle,” Bickel says, “and they’re from Australia.” 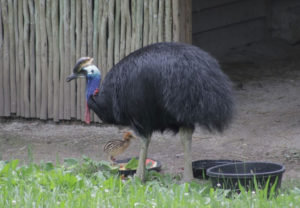 While the adult has those distinctive markings, the new chick looks much like it came from a chicken. It has a brown head and alternating black and gold stripes down its back, which helps it to blend in to the brush. It’s still not clear if the chick is male or female. It will reach maturity in about three years and has a life expectancy of 26 years.

Bickel says zoo staff and visitors are delighted to see the tiny chick. “We’ve had cassowaries at Blank Park Zoo since 2011 and this is the first time we’ve had a successful hatching,” Bickel says. “Last year, we looked in all the records, it looks like less than ten casswaries hatched in zoos in North America in the last year.”

The cassowary is endangered in Australia and they are part of the species survival program, which he says makes this special for not only Blank Park Zoo but also for the species.