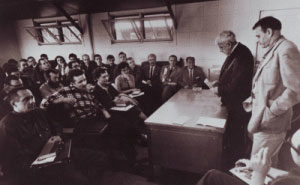 The Iowa Department of Cultural Affairs has awarded $140,000 in grants for a new program to help the developers of film and digital media productions that tell Iowa stories.

The leader of the State Office of Media Production, Liz Gilman, says they are called “Greenlight Grants.” “The people who applied for the grants, they had to be a resident of Iowa,” Gilman says. “And then any money that is earned through these grants — they had to be used to pay for Iowa services.”

The grants can be used to produce features, shorts, pilot episodes or proof-of-concept videos to help Iowans propel a script to the screen. The first grant went to an eastern Iowa producer.  Andrew Sherburne of Iowa City was awarded $50,000 to support the production of “The Workshop,” a film about the Iowa’s Writers Workshop, the world renowned educational department at the U-I.

A documentary about a group which chased adventures outside of Iowa was awarded $40,000. “There was an Iowa club called the Mountaineers, and they were scaling mountains. As, you know Iowa is prairie and rolling hills and there’s not too many mountains around here,” Gilman says. ” So, it’s a really interesting story to show a group of Iowans who used to go out and climb mountains and come back and give talks about it throughout the state.”

Colleen Krantz of Adel won an award of $30,000 to develop a TV drama called “Complete Bull.”  “She’s developing a story that’s an interesting agricultural story regarding a woman who comes back to her state and goes into the bull semen business that her family has. So, it’s a really interesting, unique story about modern agriculture,” she explains.

The final award of $20,000 went to Scott Siepker of Des Moines to support post-production of “Kinnick: The Definitive Documentary,” about the life of football legend Nile Kinnick and the stadium that bears his name. “This is a historical documentary, so again, another great Iowa story to get out there,” Gilman says.

She says the goal is to create and sustain more jobs, retain filmmakers in Iowa and tell more stories that are important to our state.