You are here: Home / Fires/Accidents/Disasters / Hot weather causes pavement to blow out in northwest Iowa 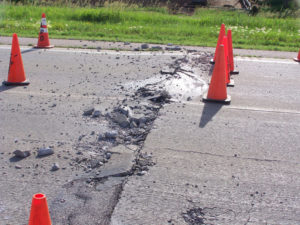 The high heat is causing the concrete to buckle on some stretches of northwest Iowa roads.

Troy Clouse, with the Iowa Department of Transportation, says he and his crews responded to five reports of pavement blowouts during the weekend in Plymouth, Sioux and Woodbury counties. Clouse says they’re making temporary repairs.

“What we’ll do in the short-term is, we’ll take a jackhammer and relieve the pressure and try to flatten out the pavement buckle,” and put in a filler, Clouse says. “At a later time, we’ll come back in and saw-cut everything out and replace the joint with concrete.”

With temperatures in the mid 90s for the first time this year, Clouse says the pavement needs to swell. “There’s moisture underneath the pavement and it’s gotta’ find a spot to release and it usually goes toward the joint,” he says. “That’s where we get our pavement buckles.” 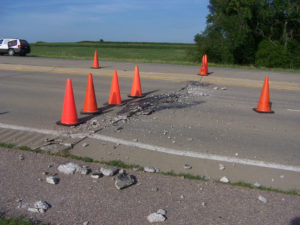 Clouse warns motorists to keep a close eye out for pavement buckles. “If they come across one, don’t drive over it. There is sharp concrete. It can puncture a tire or ruin a rim or even more extensive damage underneath the vehicle,” Clouse says. “If you can, just take the shoulder and slowly proceed around it.”

The Iowa DOT expects to see additional instances of pavement buckling, as long as the heat wave continues, which may be several more days.